Allaire State Park’s earliest recorded history of industrial activity was in the early 1750s. In 1822, James P. Allaire purchased the property, and named it the Howell Works to differentiate the site from his Allaire Works in New York.  During the next ten to fifteen years, he intensively developed the site, building homes and industrial buildings.  The site soon developed into a self-sustained community or 400 people. The Howell Works produced casting and pig iron which were shipped to Allaire’s foundry in New York for building steamship engines and boilers.

In addition to pig iron “bricks”, the principal items produced were ‘hollowware’ which was a generic term given to cast iron products such as cauldrons, pots, kettles, and bakeware.  Other items, such as stoves, pipes, sash weights, and window and door lintels, were also cast on site. We interpret the year 1836, because it was the most prosperous year in the village and America at the time.  In 1837, America would suffer an economic depression. The once active community fell into decline. The fires of the furnace were extinguished in 1848.

Today the site remains as a memorial to the social thought, experience, and planning of Industrial Era America. There are thirteen of the original buildings for you to explore and experience life in the past. A living history museum, The Historic Village at Allaire brings the past alive through reenactments and interpretive programs. Allaire’s historical interpreters, blacksmiths, carpenters, and tinsmiths are all volunteers from the local community dedicated to preserving the village as an educational resource for schools, community groups and the public at large. 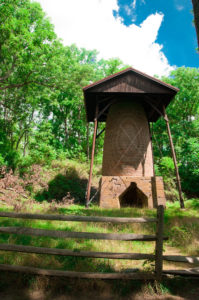 Hal Allaire invites you to meet his New York Circl

The Emameling Building has a new exhibit! Ever won

The Allaire Village Allaire Music Fest is on for t

Check out some amazing crafters this weekend at th

August Event Schedule is out! We have some great e

Only a few days left in the Christmas in July Sal